The Richmond Transit Village in Contra Costa County is a mixed-use, transit-oriented infill project spanning nearly 17 acres. The project is located at the City of Richmond’s Bay Area Rapid Transit (BART) and Amtrak Stations to provide high density housing within walking distance of public transit. The main goal of the project is to work proactively with the city, local businesses and residents, the developers, transit agencies, and government partners to plan for the continued economic revitalization of the station and the station area, primarily along Macdonald Avenue.

The transit village project was facilitated by an innovative approach taken by BART and the Richmond Redevelopment Agency to use the existing station property for new residential development instead of surface parking. The transit village contains 231 units of ownership housing; 27,250 square feet of retail space; a 3,700 square feet intermodal transit station which houses facilities for transit operators; a five-story, 800-space parking garage for BART with 9,000 square feet of ground-floor retail; and multiple townhouses and live-work units. The project also provides 50% of the homes to moderate income buyers. BART approved a new five-level garage to cater to BART parking demands, as well as neighboring retail and civic uses. 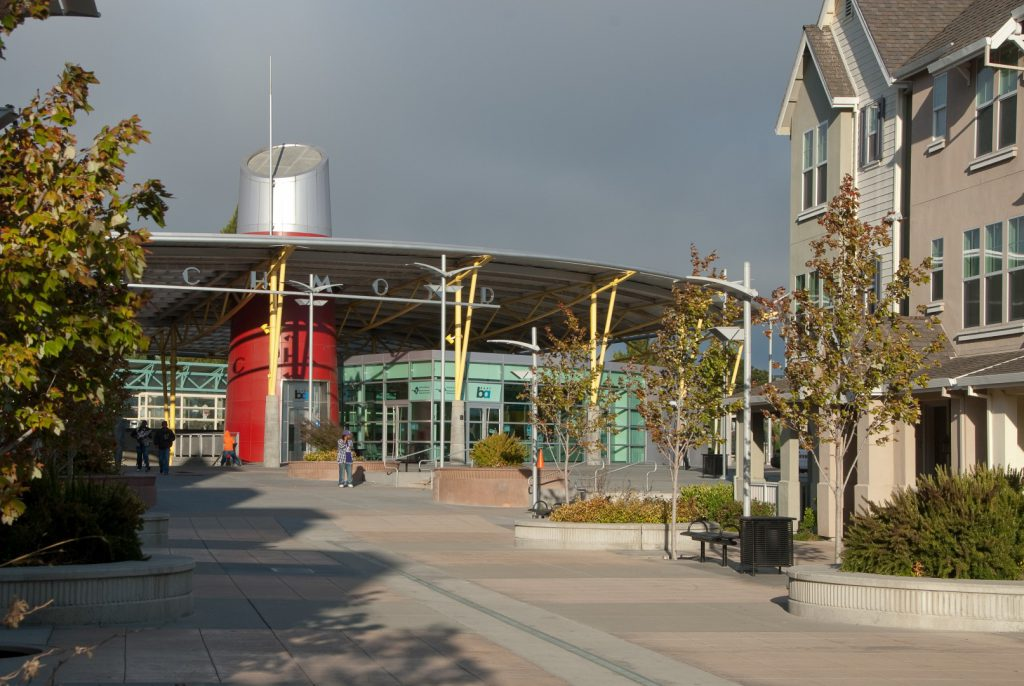 Richmond Transit Village has successfully transformed underutilized land while promoting transit ridership and home ownership. Despite the increase in the overall production of affordable housing, the City would like to see more affordable units incorporated into market-rate housing projects. To do so, the City amended its Zoning Ordinance to incorporate changes in the State’s housing density bonus law that provides incentives for projects receiving a density bonus.

At each phase, new guidelines, ordinances and laws have been created to address challenges that arise. Currently, most of the developers elect to pay in-lieu fees as an alternative to providing the affordable units required under the City’s Inclusionary Housing Ordinance. However, the City’s Density Bonus Ordinance does not specify the amount of parking reductions.

As part of the Zoning Ordinance Update, adopted on November 15, 2016, the city evaluated potential incentives. The goal of these incentives was to ensure adequate provision of affordable housing as mandated in Association of Bay Area Governments (ABAG) 2014–2022 Regional Housing Needs Allocation. In their findings, ABAG found that most residents in Richmond are spending more than 30% of their income on rent, which is why the city adopted in-lieu fees and density bonuses into their updated zoning ordinance. The city has “a total need of 2,435 units through the year 2022, out of which just over 29% is for low and moderate-income households and another 18% is for very low and extremely low-income households.”

Another challenge that the city is experiencing is attracting more mixed-use developments. Funding available for market rate financing is very limited, and the city and developers have not qualified for new markets tax credit for developments near the transit village. The plan calls for mixed-use income developments for this major activity center and needs financial support to build it.

Located in the Encanto neighborhood in eastern San Diego, Villa Encantada is the redevelopment of an underused 163-space parking lot owned by Metropolitan Transit System (MTS) adjacent to a trolley station. It is the first implementation of the Southeast San Diego Community Plan, which calls for mixed-use villages next to transit stations in the Encanto neighborhood.

The need for parking replacement was determined through an independent third-party traffic impact analysis and the application of the City of San Diego’s Municipal Code parking requirements. The project developers requested to use the Transit Area Overlay Zone (TAOZ) Parking Rate, which would allow for a reduction of 0.25 parking spaces per residential unit and a reduction of 4.3 parking spaces per 1,000 square feet of commercial floor space. 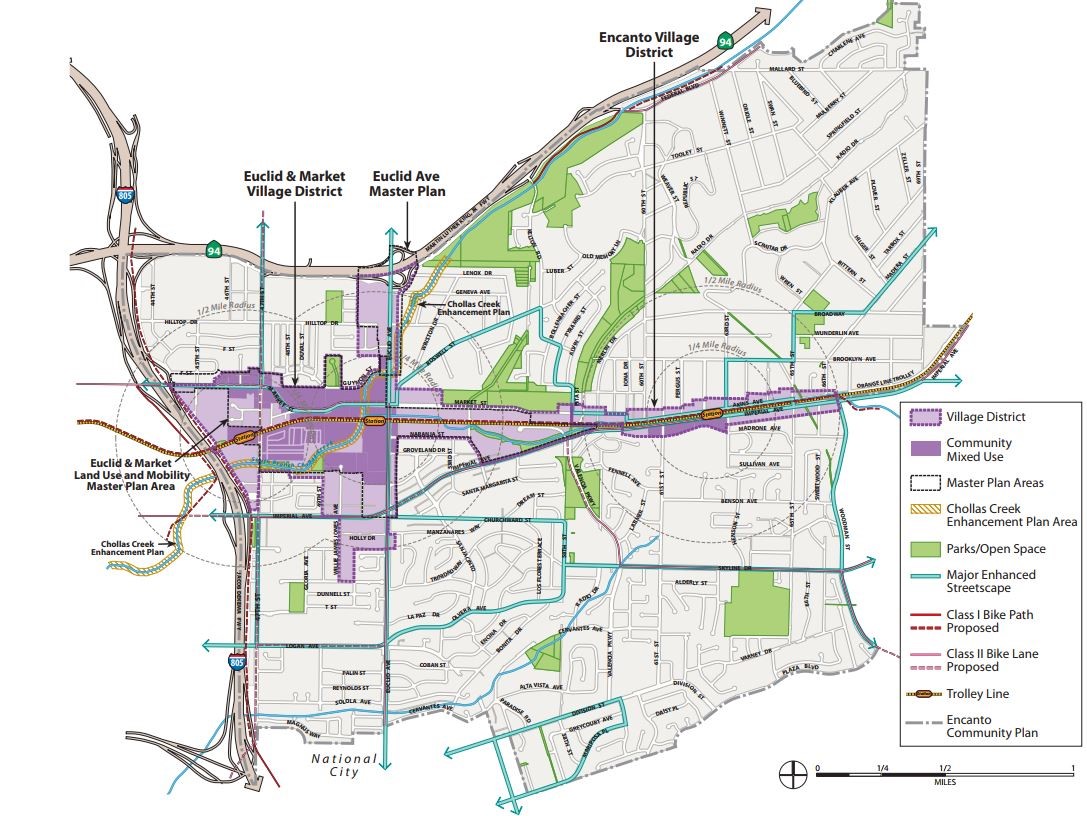 The City of San Diego has reduced parking requirements by 25% spaces per dwelling unit for transit areas or very low-income housing areas within multi-family residential developments, and by as much as 70% spaces per 1000 square foot feet for commercial, office, and mixed land uses. Other policy reforms include: allowing tandem parking and shared parking; provision for a payment in-lieu of providing on-site parking; and provision for electric vehicle, bicycle, and motorcycle parking, as well as alternative transportation incentives such as transit passes.

The City of San Diego planning staff have made the following observations about the challenges of the planning and development process:

Ken Malbrough, community resident and chairman of the Encanto Community Group, has observed that the parking requirements adopted were well-received in the community, partly because transit ridership is high and service is fairly frequent on the trolley line that runs through their neighborhoods. Malbrough also affirmed the importance of community involvement in the planning process to guide growth in a manner that reflects the community’s vision.

South San Francisco’s award-winning Station Area Specific Plan was adopted in February 2015. Its purpose is to expand the City’s currently obscured and relatively inaccessible Caltrain station and better connect the adjoining downtown area and the emerging biotech areas east of Highway 101. The Plan doubles the number of homes in the downtown, adding about 1,400 units and increases commercial square footage for new office and research and development uses by about 1.2 million square feet.

Improvements to the downtown area will result in a walkable, bike friendly neighborhood with a variety of housing options. These improvements include conversion of existing angled parking to parallel parking to allow widening of sidewalks and bike lanes. Under the Plan, allowable building heights in both the downtown and eastern neighborhood are greatest near the Caltrain station while heights are reduced in the historic downtown and near existing single family and multi-family neighborhoods.

In developing the Downtown Station Area Plan, City officials found the key to winning public support was the extensive community outreach they conducted to educate the public about the need for additional housing for the growing number of workers and millennials who prefer urban residences, particularly along transit corridors. It was important to get the public’s input by asking questions such as: “What is important to you?” and “What element do you want to see in the plan?”
The public expressed concerns over three main topics: historic preservation, displacement, and traffic. The Plan emphasizes preserving the unique historic character of Grand Avenue by limiting building heights along the street front for new developments. The Plan also includes programs to mitigate the risk of displacement and preserve existing affordable units. 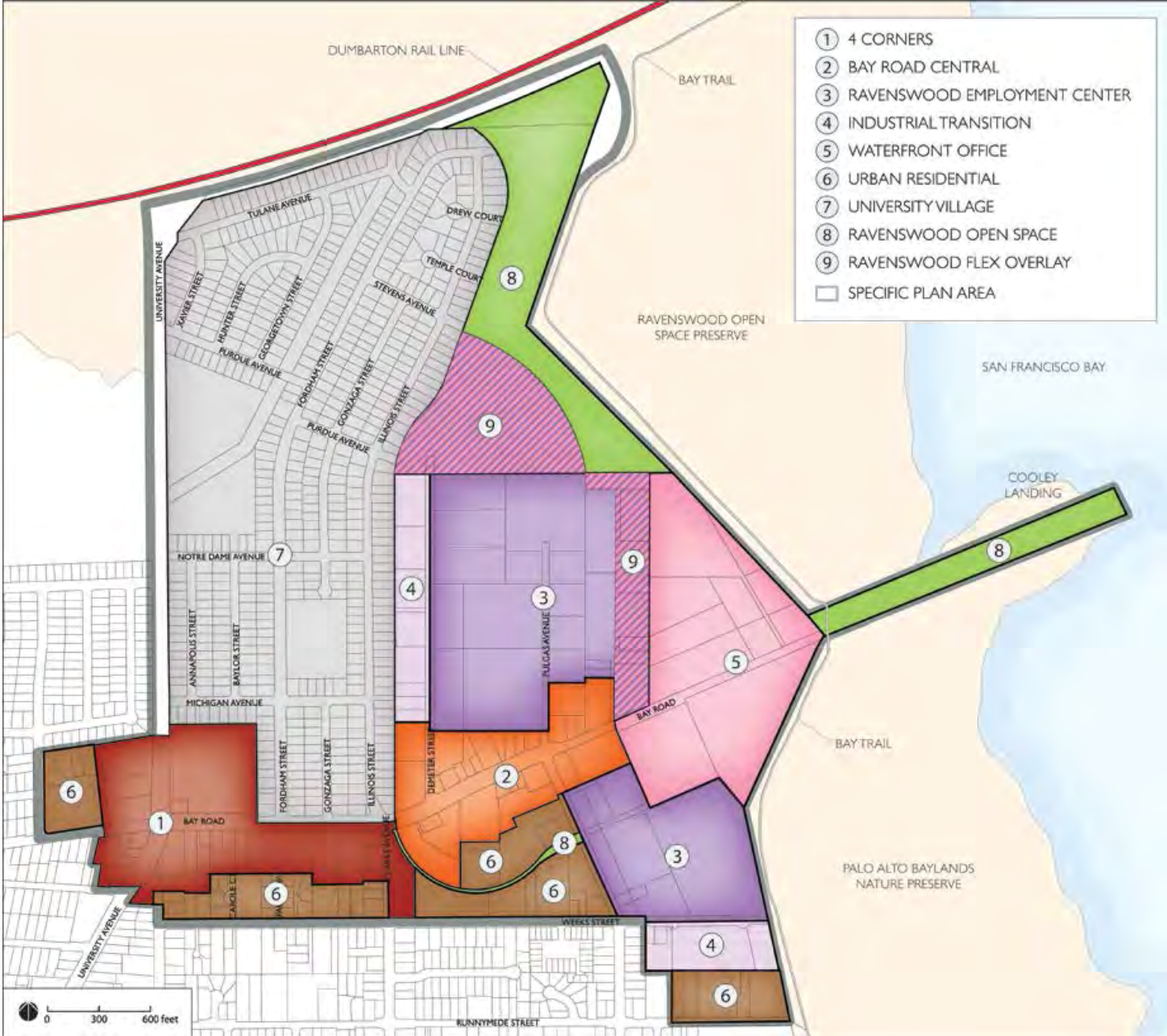