The City of Mountain View El Camino Real Precise Plan covers 287 acres and extends the entire 3.9-mile length of El Camino Real in the City, including some adjacent parcels. The Precise Plan, adopted on November 17, 2014, implements the City’s 2030 General Plan vision for the El Camino Real Corridor as a revitalized grand boulevard. The El Camino Real Precise Plan represents a unique application of the transit oriented development (TOD) concept to a linear auto-oriented transportation corridor. Instead of concentrating development around a single transit station, it creates a series of tiered developments within the corridor focused around transit and pedestrian activity centers, with higher intensity around bus stops in the Village Centers. It also includes neighborhood-serving retail at other intersections, as well as additional higher-density housing and some mixed uses provided in between with appropriate transitions to protect adjoining residential areas.

The Precise Plan supports the Grand Boulevard Initiative (GBI), a collaboration between 19 cities, counties, and local and regional agencies whose vision is for El Camino Real to achieve its full potential as a place for residents to work, live, shop and play, creating links between communities that promote walking and transit. This Precise Plan can serve as a model for cities in San Mateo County, either along El Camino Real or with similar linear transit corridors.

The Precise Plan aims to create a more livable community along the boulevard through policies and standards that promote a “tiered” development approach, which concentrates higher density activities at specific locations with improved transit access. A coalition of local organizations representing over a thousand Mountain View community members with interest and expertise in transportation, land use, housing, and environmental protection participated in the development of the El Camino Real Precise Plan. They were particularly concerned with improving active transportation (walking, bicycling) along the corridor to access the housing and other facilities being proposed.

Overall, the city has approved about 1,400 new housing units in the corridor, including about 125 affordable units, some built during development of the Precise Plan, which helped guide future policies. Several new residential projects approved under the Precise Plan include:

The community was very interested in active transportation and affordable housing, but residents were also concerned about the potential loss of local retail. There were several keys to meeting those concerns. Under the plan, the City encourages housing all residents along the street, including infill housing (such as row houses on smaller lots), but provides for higher densities to support commercial development at key intersections. Another key was the City’s community benefits program, which provides clear and predictable standards for what the community wants to see in the corridor. 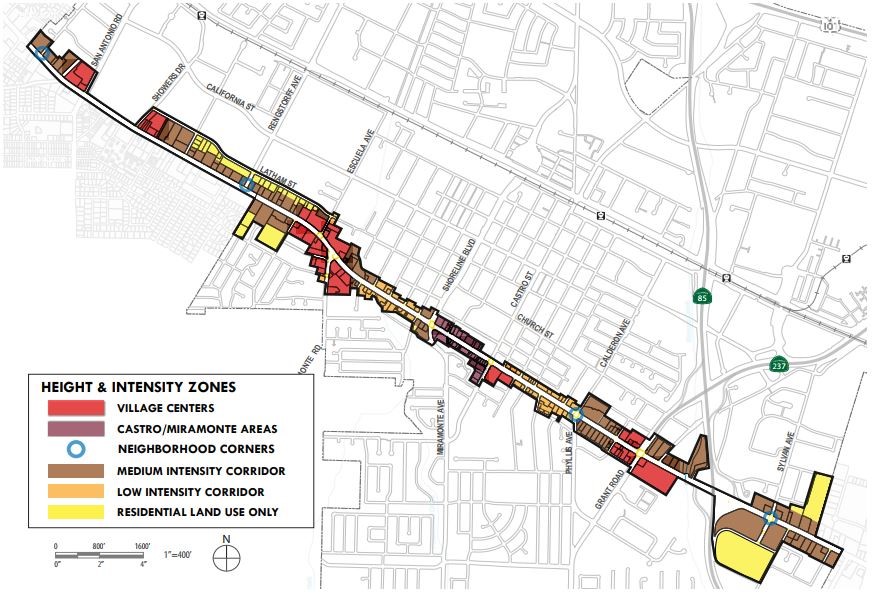