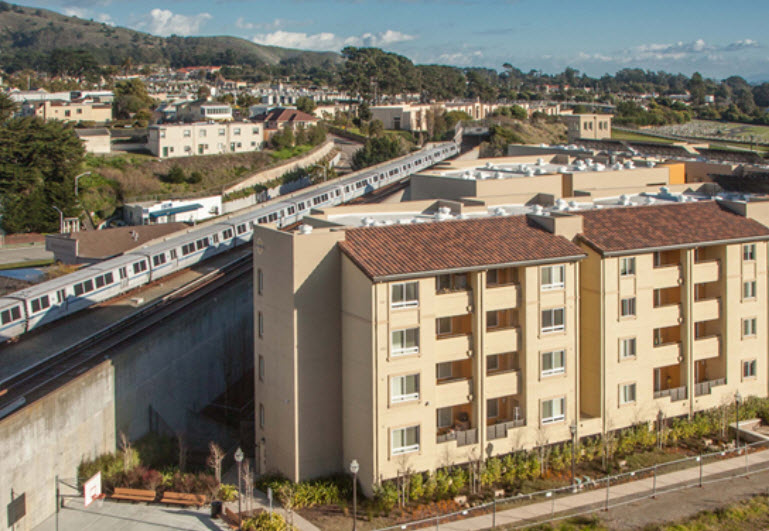 Transit-oriented development (TOD) is a development pattern that integrates residential and commercial uses with other amenities located within a half-mile of high-capacity public transit.1 TOD is most commonly located near fixed-rail transit, such as BART, Caltrain, and light rail. Projects often include one or two floors of retail or office space with residential units above.

The key benefits of TOD include reduced reliance on single-occupancy vehicles, and corresponding reductions in household spending on transportation (car ownership and fuel costs), traffic congestion, and pollution. With transportation as the second largest expenditure in the average household’s budget (after housing), reducing transportation costs allows households to save or spend that money for other purposes.

As demand for walkable and transit-accessible development grows, large employers are increasingly turning away from office parks in favor of locating near transit stations. Transit-accessibility is increasingly an employee recruitment and retention tool.

TODs often face significant opposition and challenges in the planning and development phases. These barriers include zoning ordinances that limit density and require large amounts of parking, community opposition to high-density development, and higher land values near transit that make TOD more costly and complex than traditional single-use development on undeveloped land. Due to their prime location, higher land costs, and new construction costs, new TOD projects typically have higher rents or home prices than comparable properties in other locations. Including a proportion of affordable units, whether through an inclusionary housing policy or other means, is critical to ensuring that TOD contributes to overall housing affordability.

With 18 BART and Caltrain stations, TOD projects have increased throughout San Mateo County. In recent years, many cities in the County have adopted new specific or precise plans for their downtowns that emphasize higher-density residential and commercial development near stations, and projects such as Bay Meadows in San Mateo and Radius apartments in Redwood City have gone up.

TOD can provide the following benefits:

1 Reconnecting America, http://reconnectingamerica.org/what-we-do/what-is-tod/
Home for All